This volume contains annotated selections from Raya Dunayevskaya’s lifelong writings on Hegel, Marx, and dialectics, edited by Peter Hudis and Kevin B. Anderson.  It comprises work on dialectics that did not appear in Philosophy and Revolution (1973) and other of her books published during her lifetime.  It begins with one of Dunayevskaya’s last writings on dialectics, followed by a closely linked text, her 1953 “Letters on Hegel’s Absolutes,” which first carved out her own unique concept of dialectic.  The volume also includes substantial outlines of major works by Hegel such as the Phenomenology and the Logic. In addition, it features a selection of her letters on dialectics to Black, labor, and student activists, as well as to the philosophers and social theorists Herbert Marcuse, Erich Fromm, C. L. R. James, Grace Lee Boggs, Jonathan Spence, George Armstrong Kelly, and Louis Dupré.  Finally, it contains writings from Dunayevskaya’s last years on dialectics of organization and philosophy, connected to an unfinished book on that subject that sought to go beyond the dichotomy in radical thought between the vanguard party and grassroots spontaneous movements.  The editors have also contributed an introduction, “Raya Dunayevskaya’s Concept of Dialectic,” that situates her writings on dialectics within a larger tradition involving earlier thinkers like Lukács, Adorno, James, and Lenin, as well as more recent ones like Derrida.

Introduction: Raya Dunayevskaya’s Concept of Dialectic, by Peter Hudis and Kevin B. Anderson

Part I. The Philosophic Moment of Marxist-Humanism

Ch. 8. Hegel’s Dialectic and the Freedom Struggles of the 1960s — Lecture in Japan on Hegel — Presentation of Black/Red Conference — Logic as Stages of Freedom, Stages of Freedom as Logic, or the Needed American Revolution

Ch. 13. The Hegel-Marx Relation Revisited — Letter to Harry McShane — On the 150th Anniversary of Hegel’s Death: How Valid for our Day Are Marx’s Hegelian Roots?

Part V. The Changed World and the Need for Philosophic New Beginnings, 1982-87

Ch. 15. Forces of Revolt as Reason, Philosophy as Force of Revolt — Not by Practice Alone: The Movement from Theory — Letter to the Youth on the Needed Total Uprooting of the Old and the Creation of New Human Relations — Dialectics of Revolution and of Women’s Liberation — The Power of Abstraction

Ch. 17. Reconsidering the Dialectic: Critiquing Lenin … and the Dialectics of Philosophy and Organization — Letter to Louis Dupré — Letter to George Armstrong Kelly — Talking to Myself — On Political Divides and Philosophic New Beginnings

Stacey Whittle, “Philosophy on the Barricades,” International Socialism No. 127 (Summer  2010)

Anne Pomeroy, “Why Marx, Why Now?: A Recollection of Dunayevskaya’s Power of Negativity,” Cultural Logic, 2004

(German) Interview by Simon Birnbaum with Peter Hudis and Kevin B. Anderson on US Left, Jungle World, 18:2, May 2007

“Brilliant theorist, committed activist, and passionate scholar, Raya Dunayevskaya was a role-model for my generation We are fortunate to have her back in this wonderfully edited work that conveys the excitement of a time when, for Raya and her interlocutors (C. L. R. James and Herbert Marcuse among others), philosophy and the struggle against social injustice were two sides of the same urgent endeavor. Her understanding of dialectics as a method whereby each generation has to discover its own revolutionary task, her insistence that Marxism means humanism in the most inclusive sense and that socialism means the social actualization of individual freedom — these are ideas that appear young and fresh against the weary and sophistic pessimism that dominates much theory in the academy today. And more: in contrast to the boring pap of commodified culture and political sound bites, Raya’s interpretation makes the logic of Hegel’s absolute idea a fascinating and compelling read.”

—Susan Buck-Morss, Cornell University, author of The Dialectics of Seeing: Walter Benjamin and the Arcades Project

“As we enter a new millennium, critical and dialectical thinking is more important than ever in charting the vicissitudes of capital and political struggle. Raya Dunayevskaya’s writings on Hegelian and Marxian dialectics are highly insightful and relevant to the theory and politics of the contemporary moment. Thus Peter Hudis and Kevin B. Anderson’s collection of some of her most important writings provide access to a valuable theoretical and political legacy.”

“Dunayevskaya writes, particularly in the letters and talks, like a person ‘drunk’ on Hegel. But rather than causing her to lose control, this drunkenness is a measure of her intellectual excitement, an infectious one that gets transferred to her readers. She is especially good in linking Hegel, Marx, and Lenin. Her varied attempts to explain the importance of Hegel’s absolute idea and theory of negation for the traditions that followed, but also for the hoped-for revolution, are as clear and convincing as any I’ve seen from her pen. It’s a truly impressive display, and one that will delight as well as instruct most readers.”

“[This book] is the portrait of an exceptional mind at work, and a treasure trove of insights and provocative ideas. The matters Dunayevskaya brought forward remain of supreme historical importance. The editors have made this a labor of love, with fastidious footnoting, intertextual referencing, and a superb introduction. Dunayevskaya’s courage and vitality shine through and through.”

—Joel Kovel, Bard College, author of The Enemy of Nature

“With the writings of Raya Dunayevskaya, the continent of revolutionary thought underwent a seismic shift, the world-historical reverberations of which we are still feeling today and which continue to grow stronger in this new millennium as the crisis of world capitalism intensifies. Dunayevskaya is one of the great revolutionary thinkers of the last century and her work on the dialectics of philosophy is unsurpassed in the development of Marxist humanism. Expertly edited by Peter Hudis and Kevin B. Anderson, this volume is destined to become a classic. History bequeaths us few gifts, and it is up to the present generation of revolutionaries to take advantage of this opportunity to engage with Dunayevskaya’s most important ideas, condensed in this exceptional edited edition.”

—Peter McLaren, UCLA, author of Capitalists and Conquerors: A Critical Pedagogy Against Empire

The introduction by Peter Hudis and Kevin Anderson is a fine essay – so lucid and explicit yet sacrificing no complexity. It should be accessible to a range of people – students, or people recently stimulated to think about the nature of capitalism and the requirements of a different society, as well as longtime socialists who need the “placing” of Raya’s thought as it’s provided here.”

—Adrienne Rich, author of What Is Found There, on the introduction 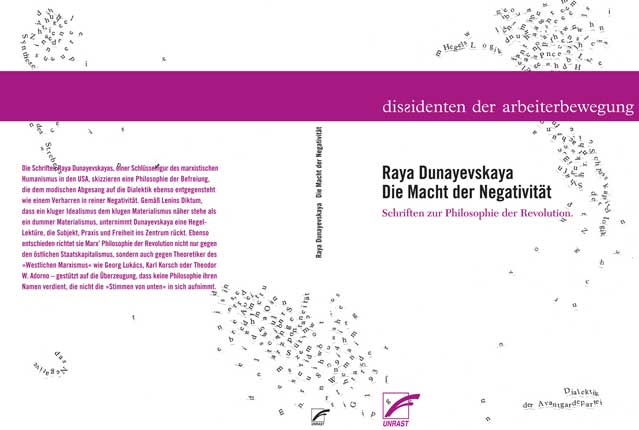